When setting up a Nomination program, clients can determine the relationship between employees and approvers through one of four methods:

The table below explains what features each method supports.

Please note: in order to be appointed successfully, approvers need to be registered to the site. Unregistered users cannot be given the Approver role.

How do approval levels work?

Most clients only have one level of approval for each of their nomination programs. This means that, in order for a nomination to be turned into an award or rejected, only one approver needs to review it.

More than one approver can be assigned to each approval level. However, once a nomination is submitted, each level of approval only needs to be actioned once, regardless of how many people have permission to access it (i.e. approver committees are not supported).

Clients can customize the number of required approval levels for each specific award. For example:

How are approvers appointed in the Open (Nominee) and Closed methods?

The most common way of linking approvers to employees is in bulk, through the employee data file. Clients will need to add the approver’s employee ID in the row corresponding to the employee they are linking the approver to

If the Nomination Method is Open (Nominee) or Closed, clients need to add extra columns to their employee data file, depending on how many programs and / or approval levels they have.

Here’s an example for one program with two approval levels:

Here’s an example for two separate programs with one approval level each:

Here’s an example for two separate programs (the first has two approval levels, the second only has one):

What does “multiple approvers” mean?

Clients using the Open (Nominee) or Closed method can link employees to multiple approvers. This can help them set up appropriate approval relationships in situations when multiple people have oversight of an employee’s work (e.g. a Retail employee working in a branch with multiple Store Managers).

When linking multiple approvers to employees through the employee data file, the columns will accept approver IDs as comma-separated values, as in the example below (two separate programs, one level of approval each):

Clients who would like to use this feature need to request it to their Client Success Manager or Client Support Team before they can start using it.

What does “Alternate Approvers” mean?

Approvers who need help processing the nominations assigned to them can appoint one or more Alternate Approvers to approve or reject nominations on their behalf. This can help achieve a quicker turnaround of nominations submitted and reviewed. 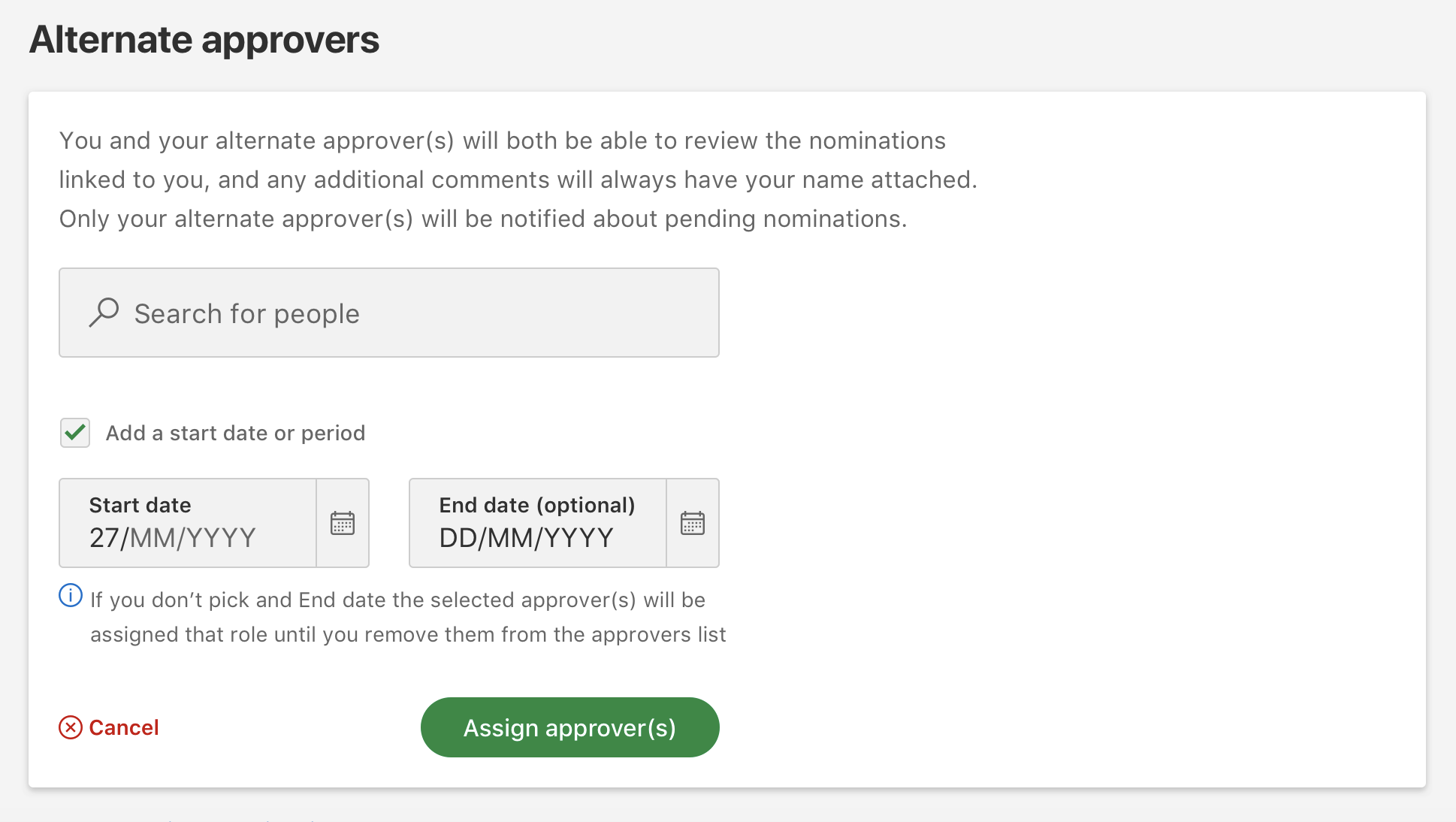 Alternate Approvers can be appointed indefinitely or for a specific period of time. A notification email will let them know they have been appointed, and how long the appointment will last.

If an Alternate Approver adds an approval reason to a nomination that has been set to be shared on the Social Wall, the approval reason will appear as a comment on the Wall, and the author of the comment will be the original Approver.

Clients who would like to use this feature need to request it to their Client Success Manager or Client Support Team before approvers can start using it.

What’s the role of a Super Approver?

A Super Approver has access to all nominations submitted through the platform, within any program and at any level of approval.

Super Approvers do not need to be linked to specific Nomination programs or specific employees in order to view, approve and reject nominations.

The Super Approver role cannot be delegated to an Alternate Approver.

To assign the Super Approver role to a user, please make a request to the Client Support Team.

3 out of 3 found this helpful

Article is closed for comments.