One of the dashboards available in the SmartInsights Analytics Engine is the Recognition Dashboard. This dashboard will provide admins with data and analytics on their organization's recognition activity.

Read on for more in depth information on what the data means for each of the charts in the Dashboard. If you'd like more tips on how it can help you drive your recognition strategy, you can read this article on how to get more value from the Dashboard.

Users with Reports Viewer admin permissions can access the Recognition Dashboard by clicking on the Platform Insights link in their Account tab (see images below). They will then find a "Recognition in your company" tile that will lead to the dashboard.

Admins who would like the Reports Viewer permissions assigned to them for the first time can contact their Client Success Manager or the Client Support Team.

Note: Reports Viewer permissions also provide access to all reports available to clients in the SmartInsights section (e.g. total registrations, discounts spend, recognition issued, etc.). It is not possible to segment this admin role to provide access to specific reports only. 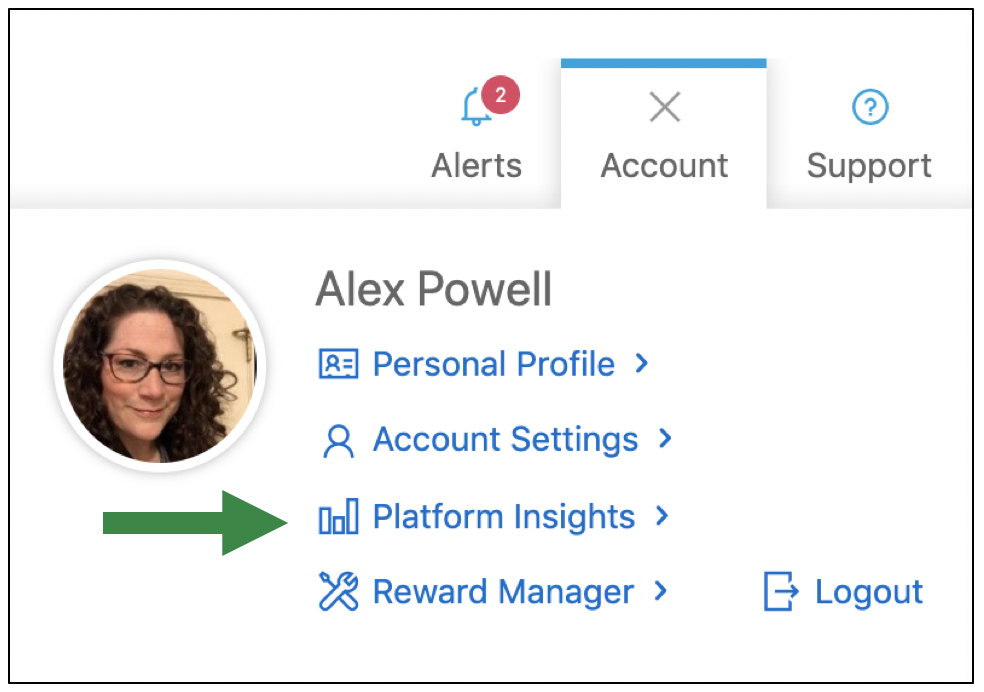 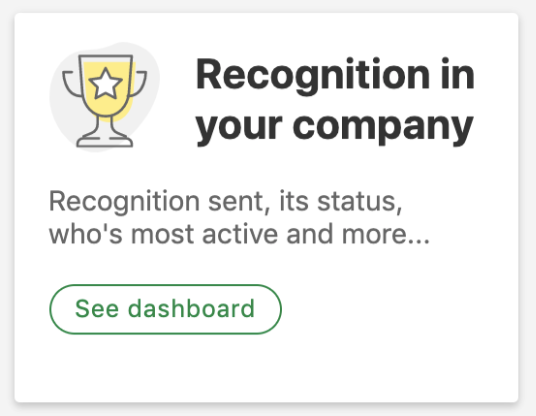 In this dashboard, admins can drill down into different groups within their organization by using the Filters.

The filter at the top of the page allows refining the data by selecting a certain group and/or a specific time frame. All of these filters are optional.

After applying a filter, the system will update the number of active users identified during the time period, that the dashboard is showing data about. To clarify:

Based on the number of active users identified in the Filter and the products covered in the Dashboard, these charts report on:

Recognition sent and received by role 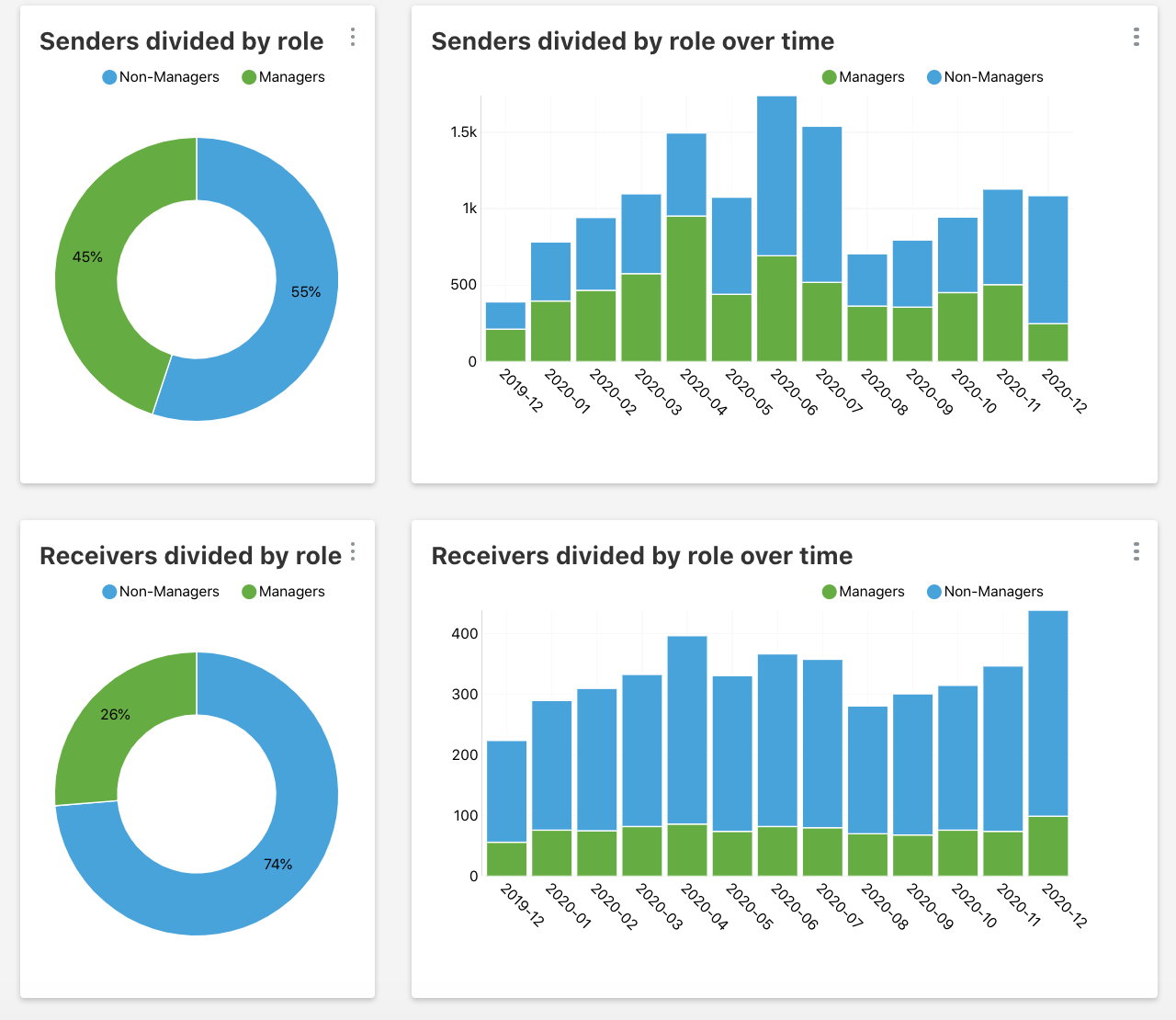 Note (17 December 2020): rather than senders and recipients, these charts count the number of recognition moments sent and received. This should explain why clients may notice discrepancies with their number of active users. Work to improve the wording of the labels will be scheduled in 2021.

These two charts break down recognition sent and received by role, and by week during the time period.

Manager and Non-Manager status is recorded at the time the recognition is sent or received. If users counted here change status over time, the numbers in these charts will still count their status at the time of the events.

These charts break down recognition sent by product (see note at the start of the article detailing which products are covered).

Recognition moments are counted as follows, in these charts and in the entire Dashboard: 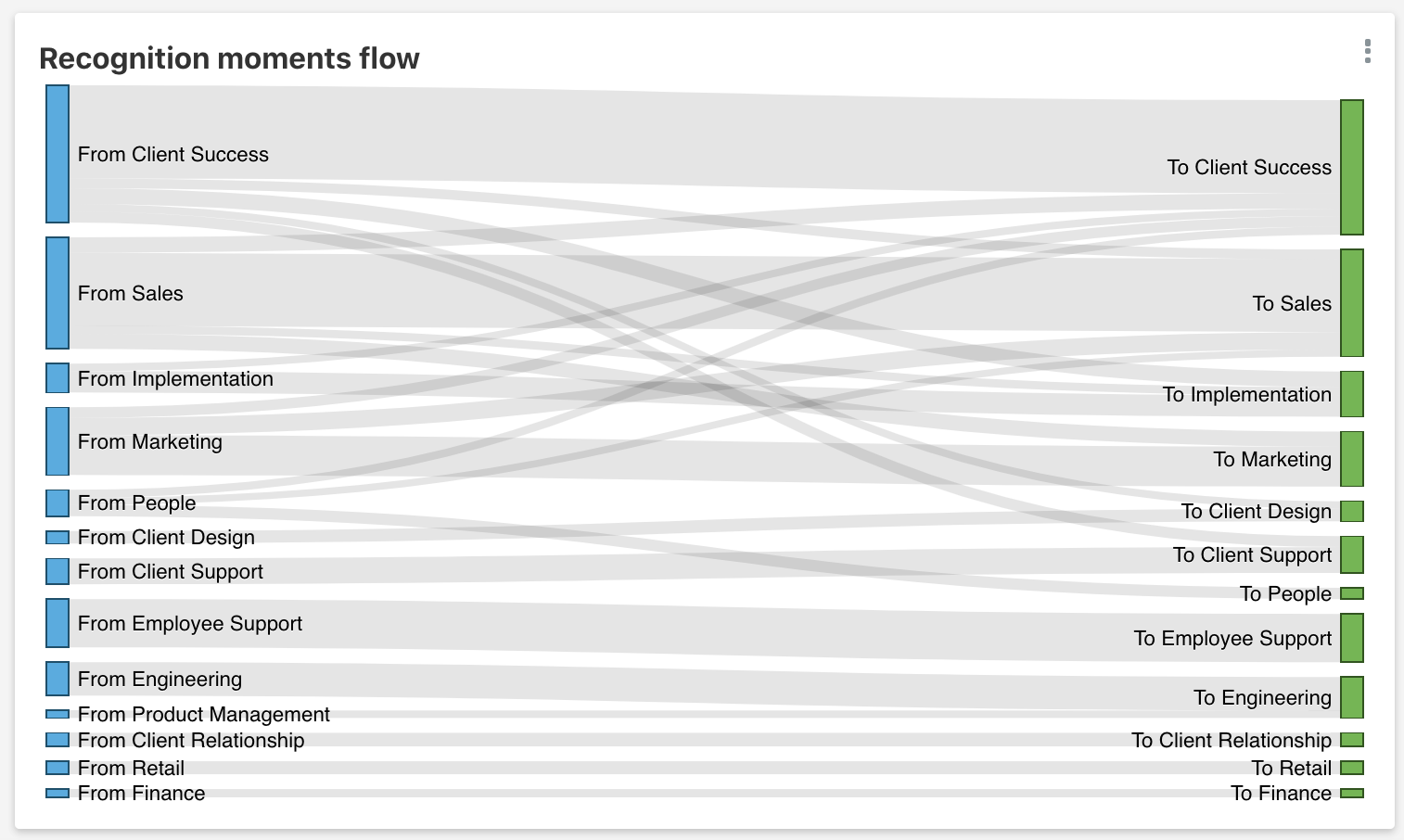 In addition to recognition demonstrating appreciation for individual work, sharing recognition across groups can communicate important information about how things work in your organization, and how employees interact.

This graph shows how recognition flows between the employee groups you create through the data in your employee eligibility file (e.g. Departments). You can use it to spot patterns such as: 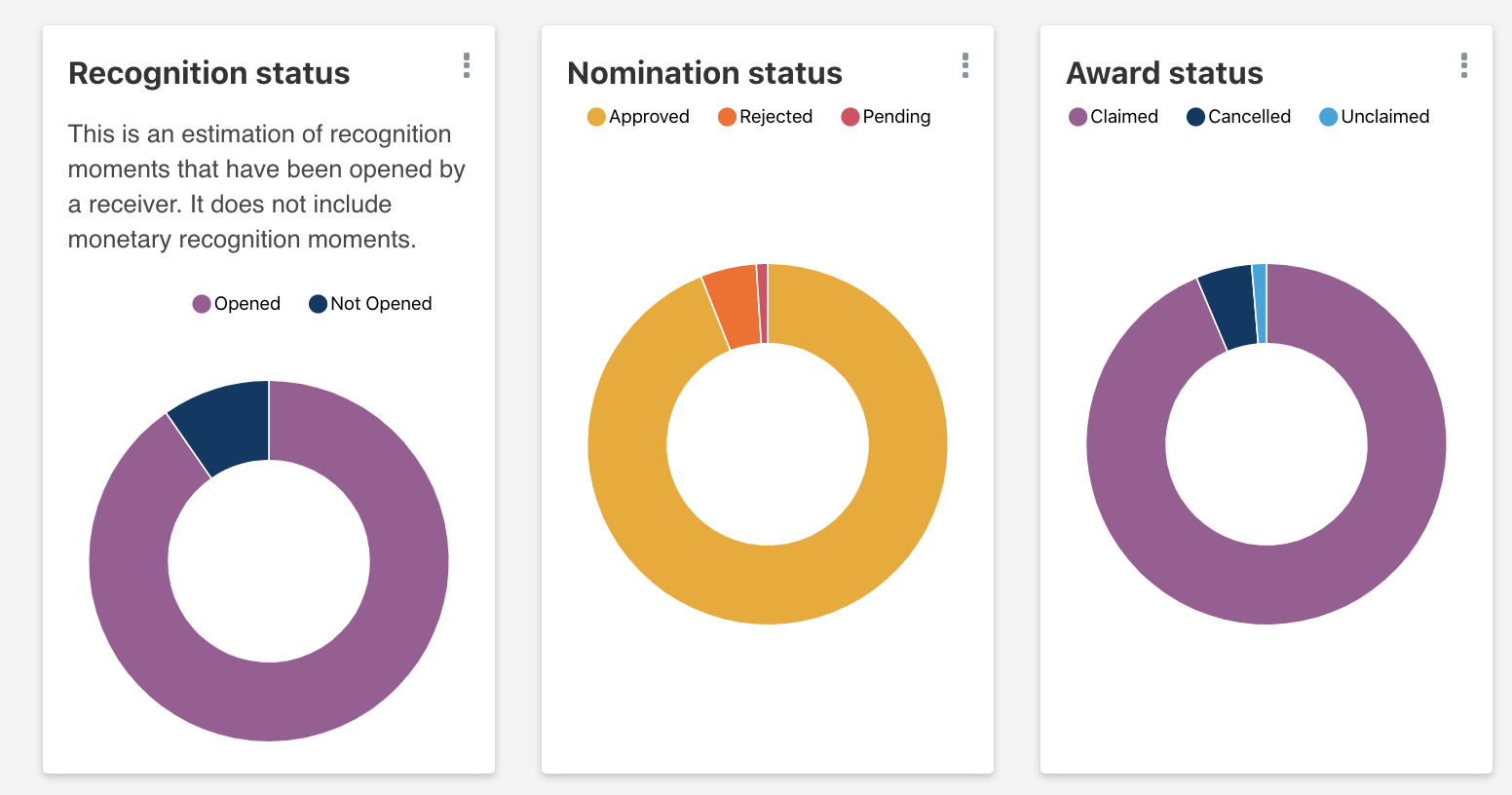 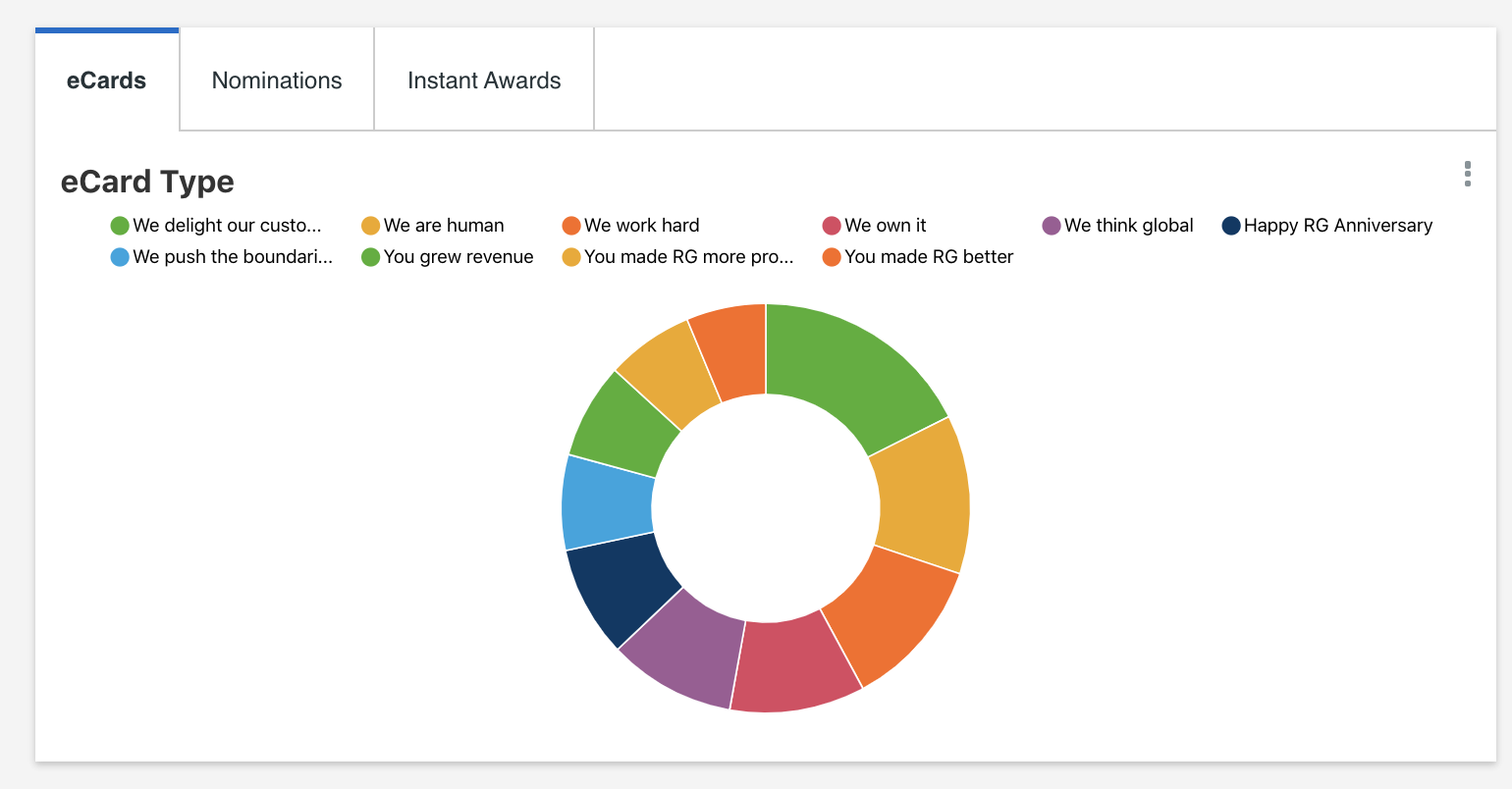 This chart shows a breakdown of the recognition types that have been sent most frequently during the time period, for each available product. As a quick reminder:

For each product, the chart will show a maximum of 10 most popular recognition types, to ensure the data can be read as clearly as possible on the page. This means that clients using more than 10 eCard or award types, may not see them all listed in the chart.

This chart counts how many comments and reactions have been added to recognition moments during the selected time period.

This chart can help clients track usage over time, by comparing the amount of recognition sent and number of senders over a period of a year. It can be useful to spot patterns such as: 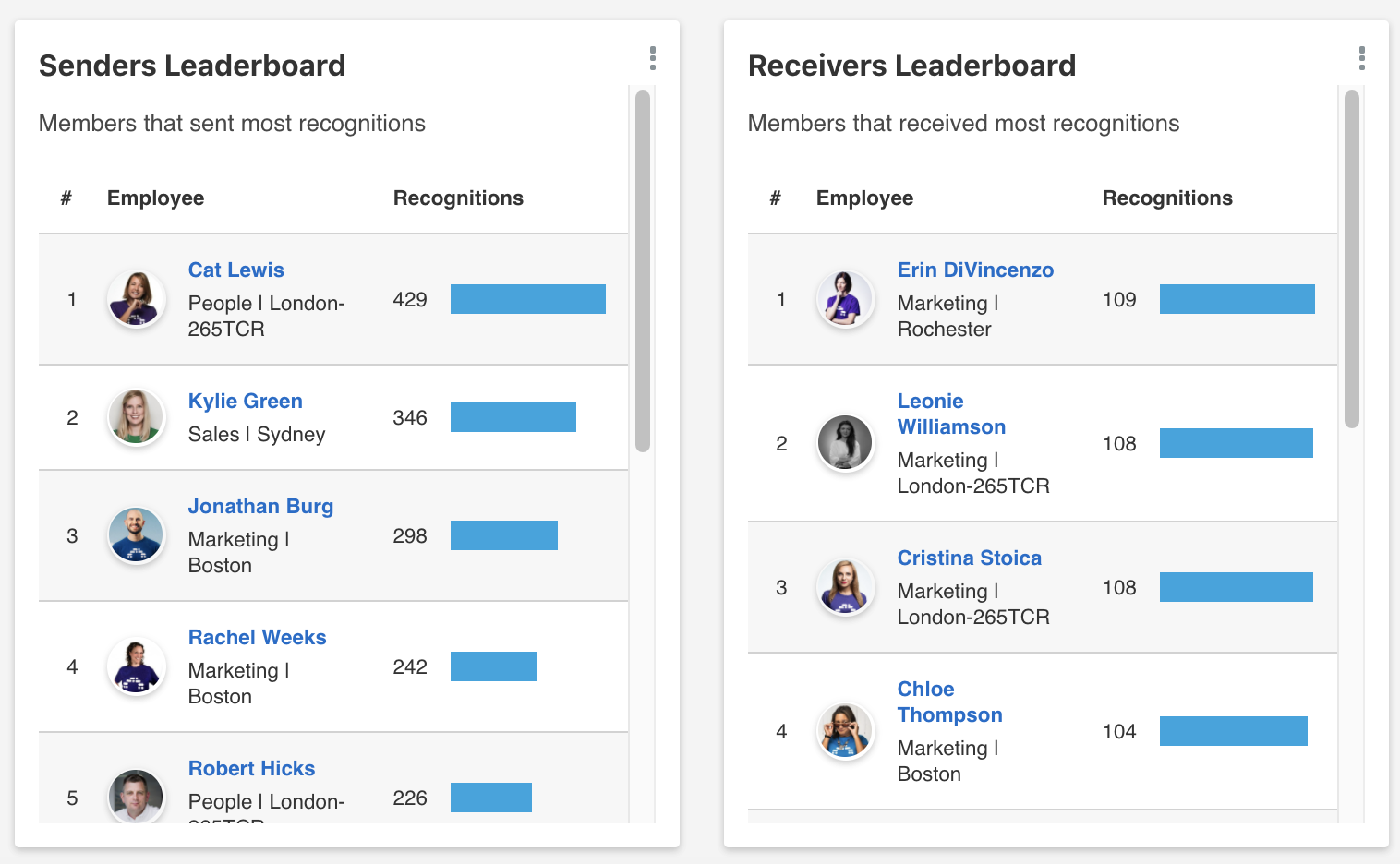 For clients using the Profiles feature, clicking on the employee names will lead to their personal profiles on the platform.

Note: InstantAwards™ sent on behalf of someone else will be counted based on the intended sender (e.g. if a HR admin sends an award on behalf of the Managing Director, the Managing Director will be shown in the leaderboard). This may mean that users who have not directly sent an Instant Award, or who are not pot owners on the system, may still appear on the leaderboards.

Article is closed for comments.