When writing a blog post, sometimes you may want to have slightly different versions of the same post depending on who is viewing it. For example, if you have a message to all employees about a new training resource that is available, you may want to include another paragraph in the post that includes only information for managers. Instead of writing two posts, you can use versions.

The first step is creating a new blog post with most of the content you want to include. This likely will be your "default version" that appears for any member that is not included in any other versions you create. On the right side you will notice that all posts are automatically set to show to the "default version" which includes all members. 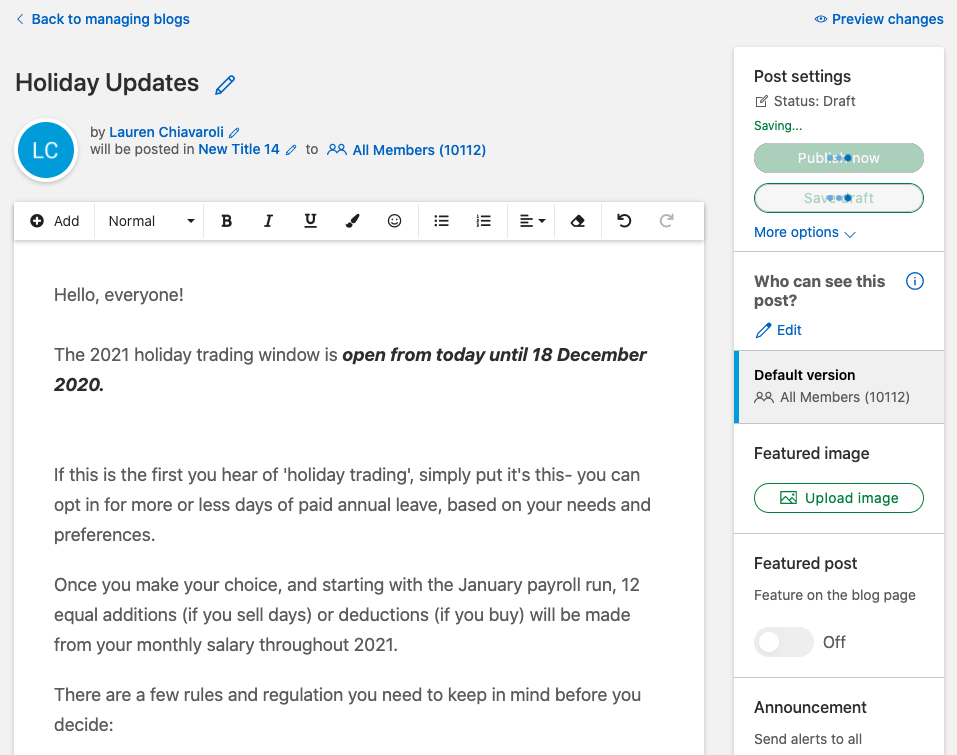 When you're ready to include custom content for a specific group, click on the Edit button underneath "Who can see this post?". A popup will appearing showing you options for adding and editing versions. To create a new version, click on the blue box at the top stating Add new version. 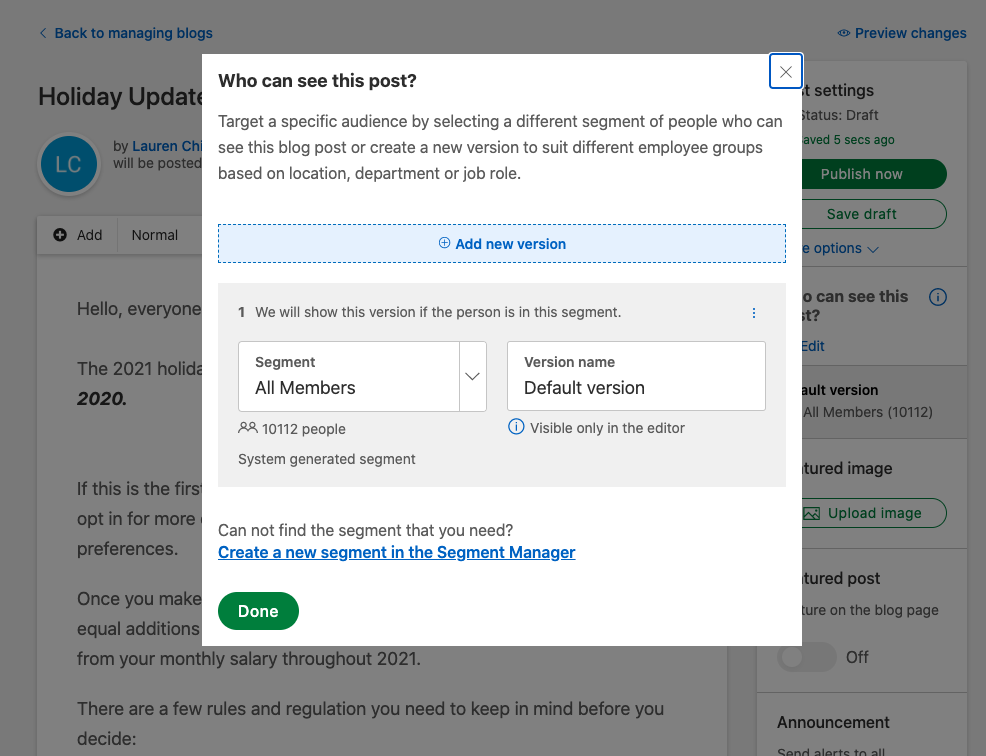 This will add another version to your post in addition to the default version including all members. In the Segment dropdown menu you will choose which segment includes the people you want to have access. (Note: if you do not already have segments created, click on Create a new segment in the Segment Manager at the bottom to be taken to a page where you can setup groups of users.) You can also name the version here to clarify who is included in the group. 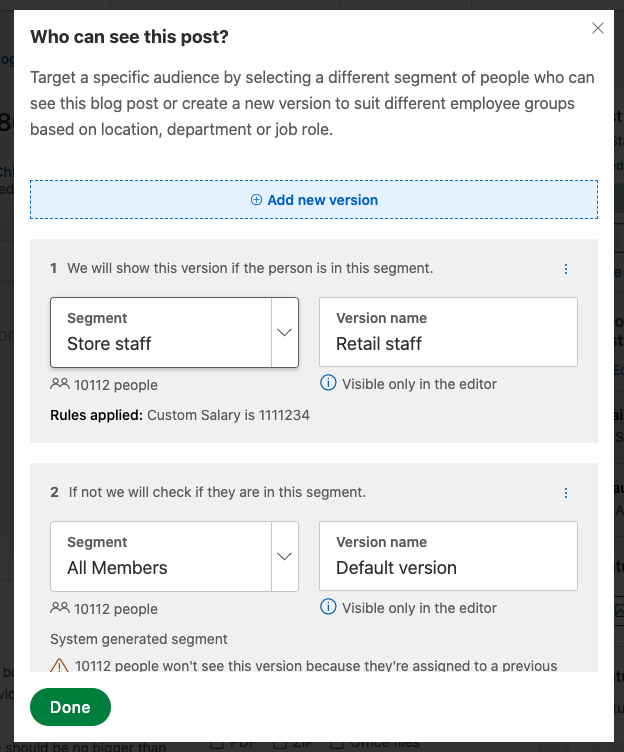 Add as many versions as you need to include the different versions of content you want to share out.

When creating versions, the version at the top will be the highest priority. This means that if someone is included in two different versions, that person will see the version that is closest to the top. Because of this, you may want to move your versions up and down to create the correct hierarchy.

In the case that a version is low down on the hierarchy, an alert will appear to let you know if that version will not be visible because the version higher up will take the priority.

Once you have created your versions, you can now edit the blog content for each version. After closing the popup, you will see all of the versions you created on the right side of the blog editor. Click on the version you want to work on. You may want to copy and paste some of the content from the default version to include in the new version, or you may want to put a completely different message there. 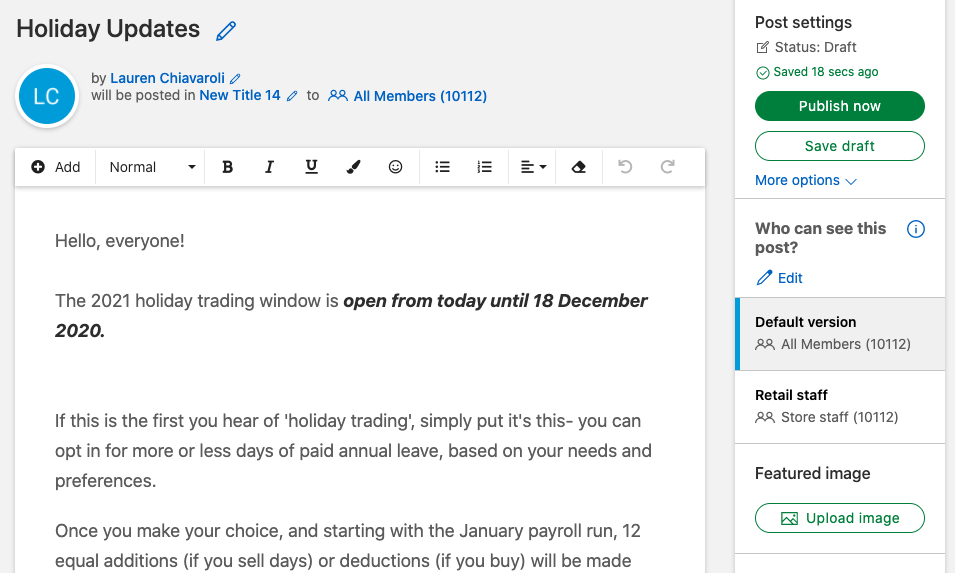 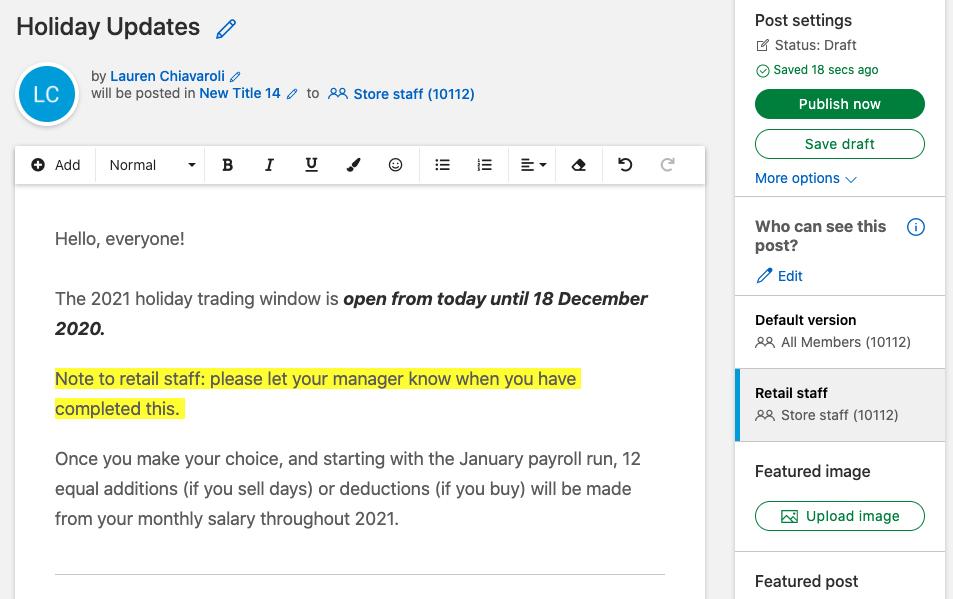 After making the changes you'd like to each version, process with the rest of your blog post as you normally would.

After your blog post with versions has been published, each segment will only see the version applicable to them. However, as a blog author you can see all versions. When you navigate to the published post, you will see all of the versions you published on the top right. From here you can click on each version to see what the group will see.

3 out of 3 found this helpful